Usually I shoot M13 because I have a few minutes and it is up.  This image started out that way, too, with 1.5 hours collected at the tail end of a long night.  The data was good enough that I thought it worth following up, so here is the followup image.  I am struck by how many stars appear! This portion of the moon's surface is covered with rilles.  It looks scratched, as if a giant cat pawed across it.  But probably these features were formed when lava tubes just below the surface collapsed, or at least that is what I have read.

The crater to the right with mountains in the middle is Bullialdus.  The long scratches stretching across the center are Rimae Hippalus.  The rille across the bottom right is Rima Hesiodus.  To its left, criss-crossing a crater (Ramsden Crater), are Rimae Ramsden.  Near the top, extending from near the top of the rightmost of Rimae Hippalus is Rima Agatharchides, which travels across Crater Agatharchides P.

In the upper left are ripples, not rimae, around the edges of Mare Humorum, but they form a nice contrast to Rimae Hippalus. The larger crater on the right is Plato, and the mountains arching to the left of it include craters all named Plato (M, B, C, F, etc.) or Laplace (D, B, L, M, etc.).  The curve ends at Laplace Promontorium, and down from that is Laplace A.  The two craters down and to the right of Laplace Promontorium are Helicon (left) and La Verrier.

Some things to note about the image:

1) The long shadow cast by Laplace Promontorium.  Using trigonometry, one could figure the height of the Promontorium by the length of the shadow.

2) Lines of craters.  A small, bright line to the right of La Verrier is a row of craters probably formed when a meteorite that was broken in pieces struck one piece after the other.  There is another just a little to the right of that line that shows as a darker line.

3) The dark canyon extending straight down the lower slope of Plato.

5) The streaks in the topography running up along the upper right side of the image.  What could possibly make such a feature?  It's as if some extraterrestrial giant pulled a rake along the moon. I've never finished off an image of M51 and NGC 5195, despite their traveling almost overhead, until now.  Here is 18.75 hours with the Atik 460EXC through the 203mm Synta-ONTC Telescope at native f/4.95, Baader MPCC, and Astronomik CLS filter.  This is four different nights of data. We had a nice night with decent seeing recently.  I set up the CFF 290 Classical Cassegrain and used with it the QHY5iii485c camera at the telescope's native f/13.5.  Here is one data set, 2000 frames, processed in AutoStakkert!3, Registax 6, and Photoshop.

Lambert, at the corner of the right triangle of large basins, is a wonderful crater whose walls rise 2,000 feet from the floor of Mare Imbrium.  Just south of (down from) Lambert is the amazing Lambert R, an older crater whose floor and much of its wall structure was covered by the lava flow that created Imbrium itself.  Lambert R is a much older crater than Lambert.  To the right is Timocharis.  Between them is the mountain Dorsa Stille, which itself rises 3,000 feet from Imbrium's plain.  The other (washed out) crater in the triangle is Pytheas.

Think the smooth parts of the moon are actually smooth?  Think again.  All kinds of meteor and geologic debris cover the surface. Some items as small as 0.5km appear in this image.

Copernicus and shrapnel around the mountains (Feb. 23, 2021) Here's another moon shot.  Copernicus is one of what I consider "big splat" craters on the moon (Tycho, Aristarchus, and Kepler are others).  Copernicus is about 800 million years old---young by lunar standards.  That's why it is lighter than the surrounding area.  Anyway, the splat threw up lots of material, so the area around Copernicus is covered with little craters and stuff that I've always figured resulted from the splat.  But a ridge of mountains rings this whole area, and those were there before the splat.

Some of my other favorite craters are in this area, too, like Lansberg, Reinhold, and Hortensius E (very cool), but I'll let you find those.  Also find T. Mayer C, which has a great internal structure.  A good resource for scouting around the moon is the map made from the Lunar Reconnaissance Orbiter.  Find the "Quickmap" at the LRO website here.  Click on the guide at upper left, click Overlays, and click "Nomenclature" on the first set of layers.  That imposes map labels on the craters.

This image is a stack of 2002/2002 images taken with the QHY5iii485c camera through the CFF 290 Classical Cassegrain at f/13.5, native focal length.  I just did the basic AutoStakkert, Registax, Photoshop routine and also used Canon Digital Prof'l 4. I can see details smaller than 1km on this image. 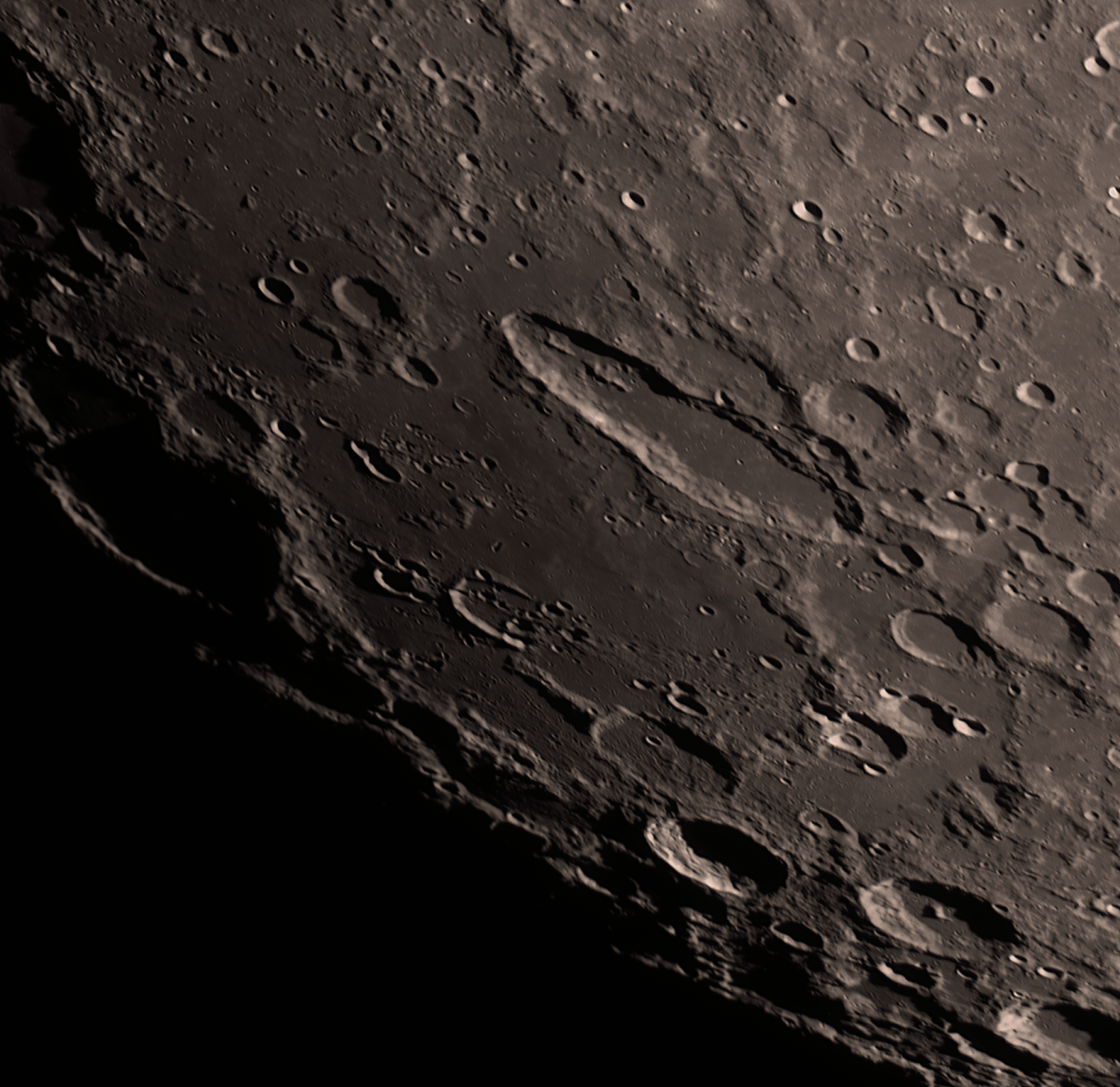 Conditions were very good on the night of Feb. 23 to take some images of the waxing moon.  I am a very casual lunar imager; my strategy is to set up, cool the scope off, and take a picture of anything interesting close to the terminator.  Also, solar system imaging is no specialty of mine; I'm pretty new at it.  But I enjoy observing the sky, and it's nice to do some visual observing, too, after imaging.

Schiller is an odd crater because whatever smacked the moon did it at an angle.  The crater is stretched out, and the floor peaks are all at one end.  Apparently Schiller is 112 miles long and 13,000 deep from bottom of the floor to the top of the peaks (but no ruler was used in this measurement).

This image is a stack of 2002/2002 images taken with the QHY5iii485c camera through the CFF 290 Classical Cassegrain at f/13.5, native focal length.  I just did the basic AutoStakkert, Registax, Photoshop routine.  I also used Canon Digital Prof'l 4.